Use Sugar as a Saturation Plugin!

Sugar is not only a powerful sonic enhancer; it's one of the best saturation plugin.

Multiband sonic enhancement may be the first thing that comes to mind when someone mentions PROCESS.AUDIO Sugar, but did you know that Sugar is also one of the best saturation plugins?

When you open Sugar on a track or bus, not only do you have tools for shaping its sonic signature, but you can also choose to dial in one of three different saturation types, all with unique characteristics. You can turn on your choice of three different types of saturation: Drive, Distort and Crush.

If you look down at the bottom right of Sugar's GUI, you'll see the saturation section. From there, you can turn on and tweak the various distortion types. As powerful and versatile as these effects are, they're easier to use than most saturation plugins. 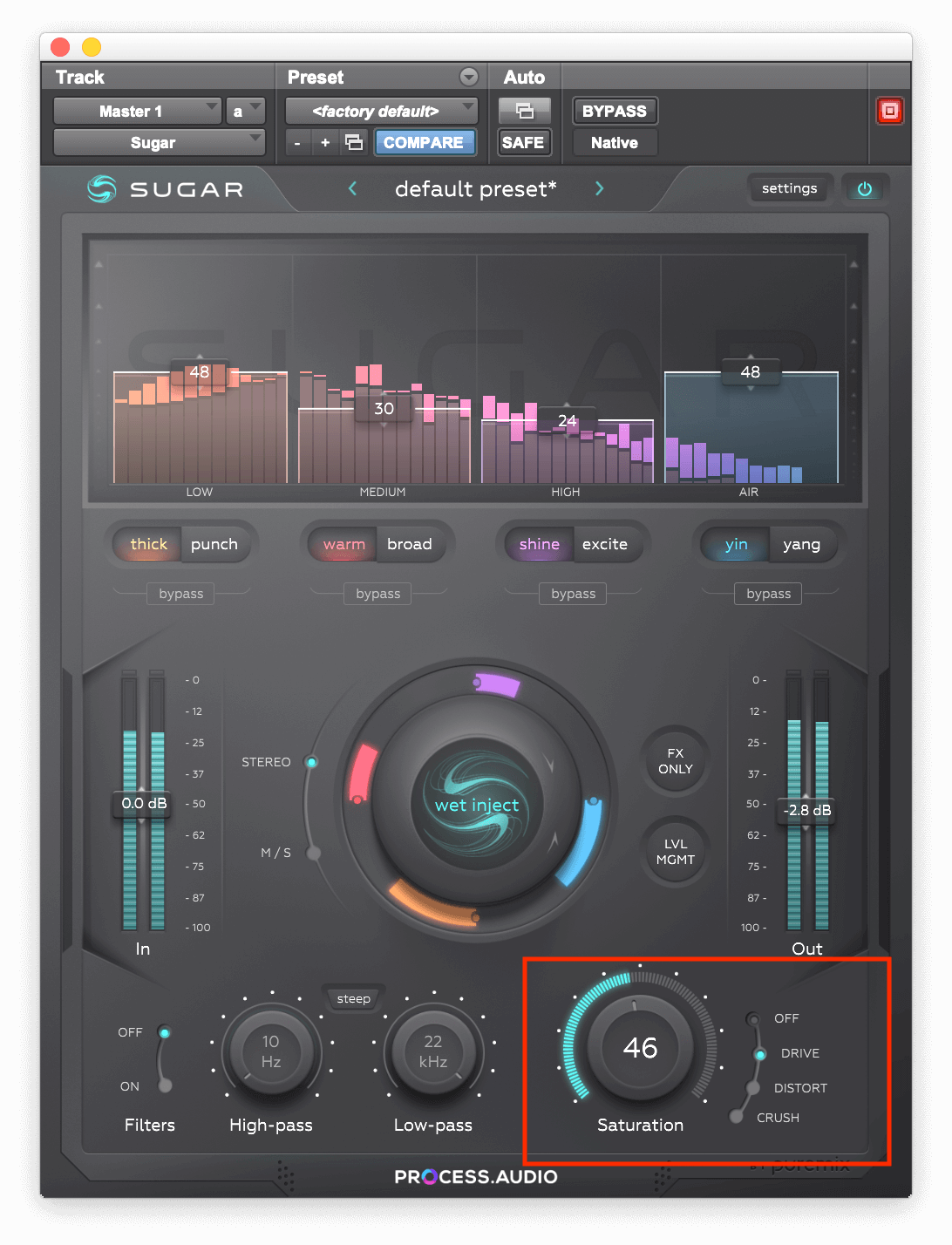 The Saturation type selector lets you switch between Off and the three different flavors: Drive, Distort, and Crush. The Saturation Gain knob on saturation plugin gives you ultimate control over how much of the effect you want to add.

The simplest way to find the setting you want is to choose a Saturation Type and then start turning up the Saturation Gain. Let's say you wanted to put some harmonic warmth on a vocal track. You could set it to Drive and turn the Saturation Gain up to a moderate setting.

Or let’s say you wanted to go for a more intense saturation setting on the vocal, giving it an edge but still not crushing it. You could achieve that in several different ways on Sugar. One is to set the Drive with a Saturation Gain setting above 12 o'clock or so.

In this first example, you'll hear a four-measure section of a vocal track with Sugar's frequency enhancement dialed in, but with the Distortion turned off. Then it repeats with Drive turned on and the Saturation knob at close to half.

Next is the same example with the instruments in, for context. This time you'll hear eight bars with no distortion. When it repeats, Drive is on. You can really hear how the Drive effect gives the mixing vocal that little extra something that makes it more powerful. 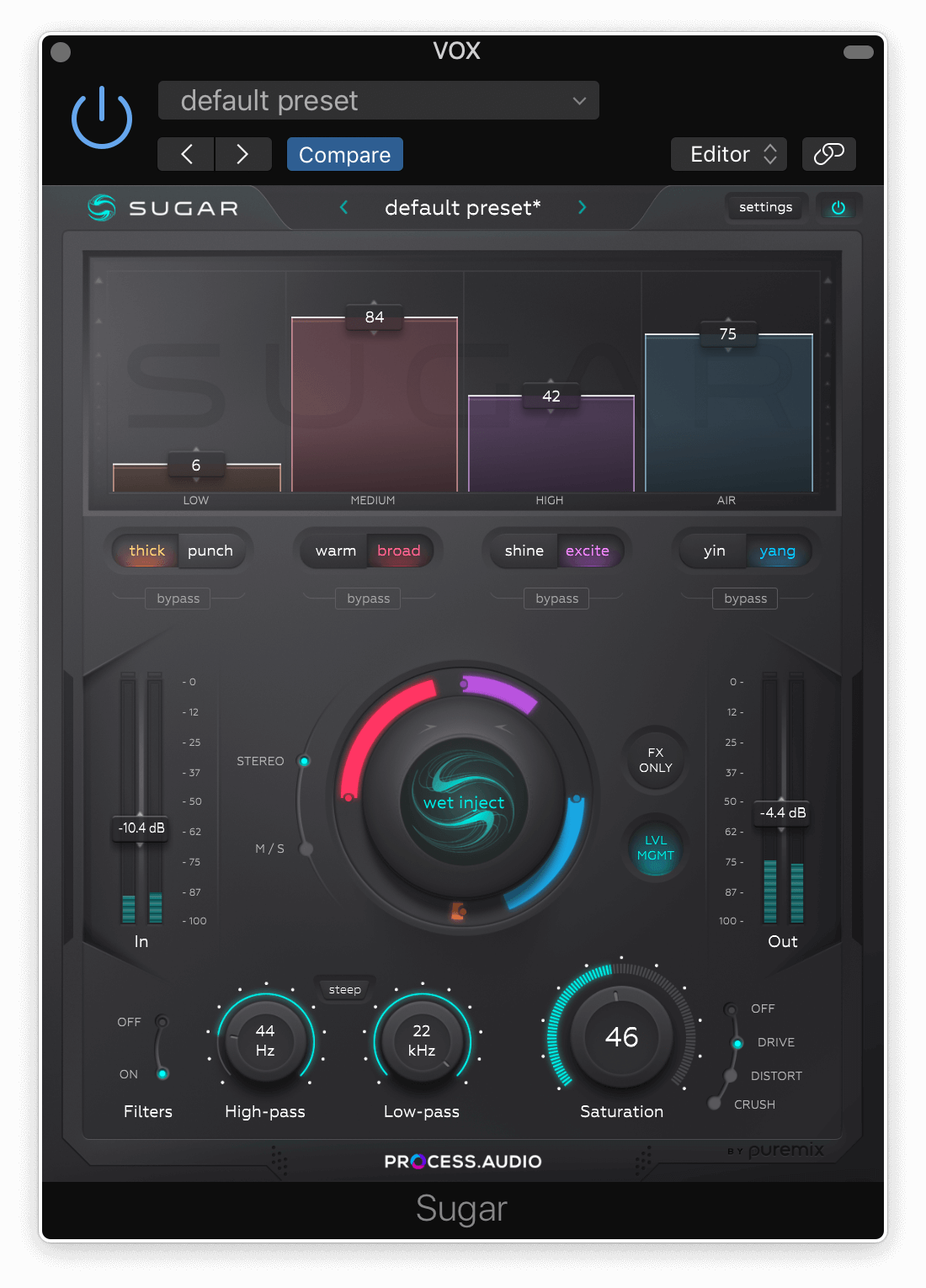 The settings used on the previous vocal examples.

Roll Away the Bass

Because saturation can add low-end and lower-midrange frequency information, the best saturation plugins, including Sugar, offer high-pass filters to roll off some of the low-frequencies before the main output.

Because the previous example featured a female vocalist whose voice is in a relatively high range, there was plenty of room to roll-off the low end before it started affecting the lower frequencies of her vocal.

On Sugar, the High-Pass Filter is independent of the Saturation effects. Even with the Saturation Type set to Off, both the High and Low-Pass filters can be active.

Here's an example with an electronic beat that will demonstrate the differences between Sugar's Distortion and Crush algorithms.

You'll hear four bars with Sugar's enhancement on but no Saturation. The second four bars have the Distort setting on. Finally, in the last four, you'll hear Crush. The Saturation Gain amount is the same between the Distort and Crush settings. 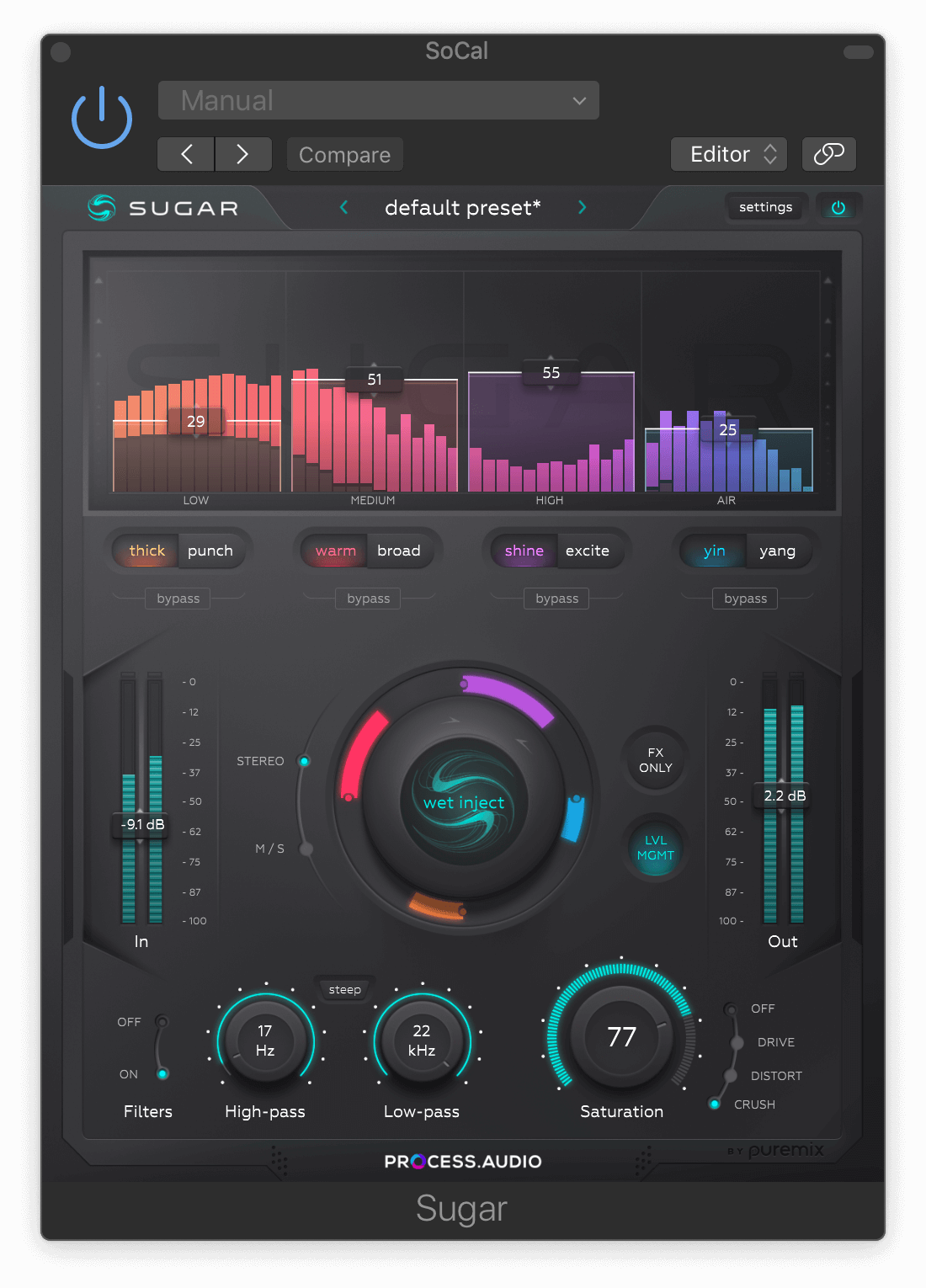 The Crush settings for the drum example.

Sugar's saturation effects work on virtually any source. Synth sounds are another example. You can take them into different sonic territory by distorting them.

As described earlier, sometimes, you'll want to use the high-pass filter to take away lower-midrange information that the distortion creates. Other times, however, you might find that the low harmonics add to the sound in a cool way.

Here's an example of that. You'll hear a sequenced synth sound play for four measures through Sugar, with no distortion. You'll then hear Sugar as a saturation plugin, with the Saturation level set to 79 and the Distort setting selected as the Saturation Type. 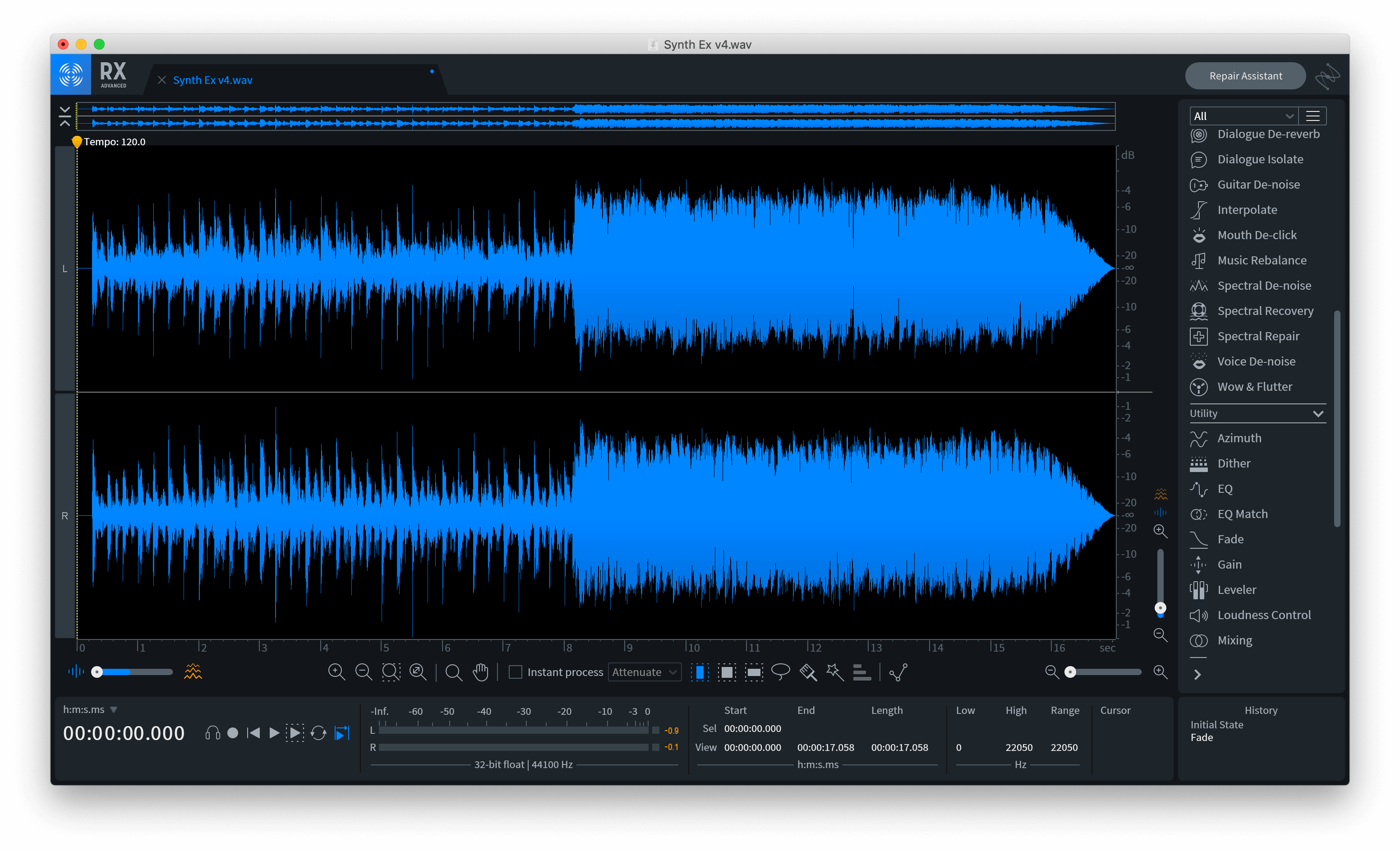 The difference in the waveform between the guitar without (left) and with (right) Sugar’s saturation.

Electric guitar is one of the instruments that saturation plugins are perfect for. If you've got, say, a guitar track that's not quite fat enough in the mix, some additional saturation can do wonders.

Sugar is perfect for distorting guitars because it can give you everything from a little added crunch to a heavy squashing, depending on how you set it.

The following screenshot shows the original (left) and distorted rhythm guitar (right) waveforms from the last example. Notice how squashed the peaks are in the distorted part. That's a visual representation of the compression that is inherent in the distortion process. 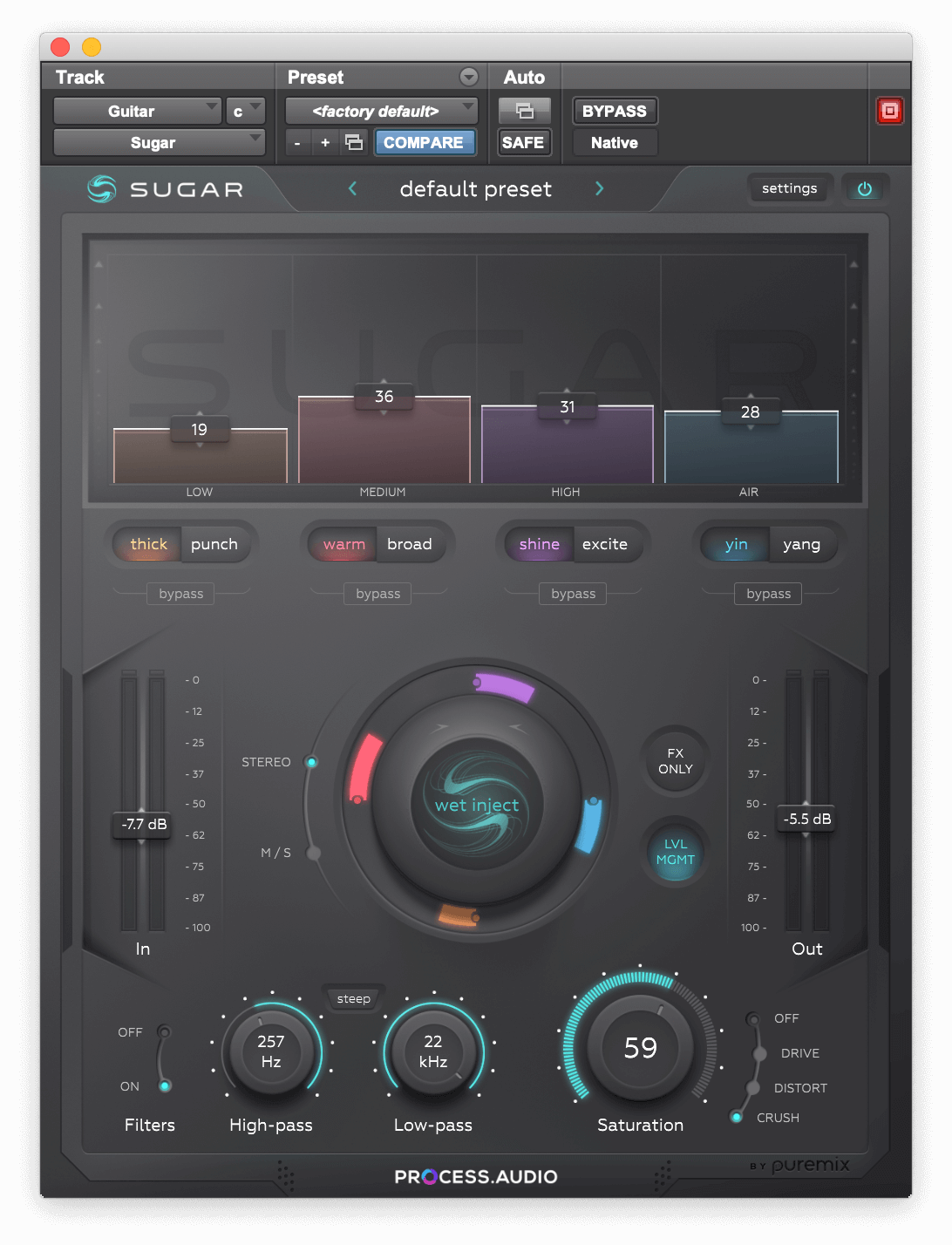 The settings for the distortion on the guitar example.

A Master of Distortion

Another place where Sugar really shines is on the master bus. Not only can you use the multiband sonic enhancement to add a little sheen, thump or midrange heft to the mix, but you can also use Sugar’s abilities as a saturation plugin to dial up some subtle saturation to give the mix a more analog vibe.

You probably would want to use the Drive setting, but you could also use Distort or Crush, if you keep the Saturation Gain knob low. If you want an excellent place to start, Sugar's presets include many really useful master bus presets. 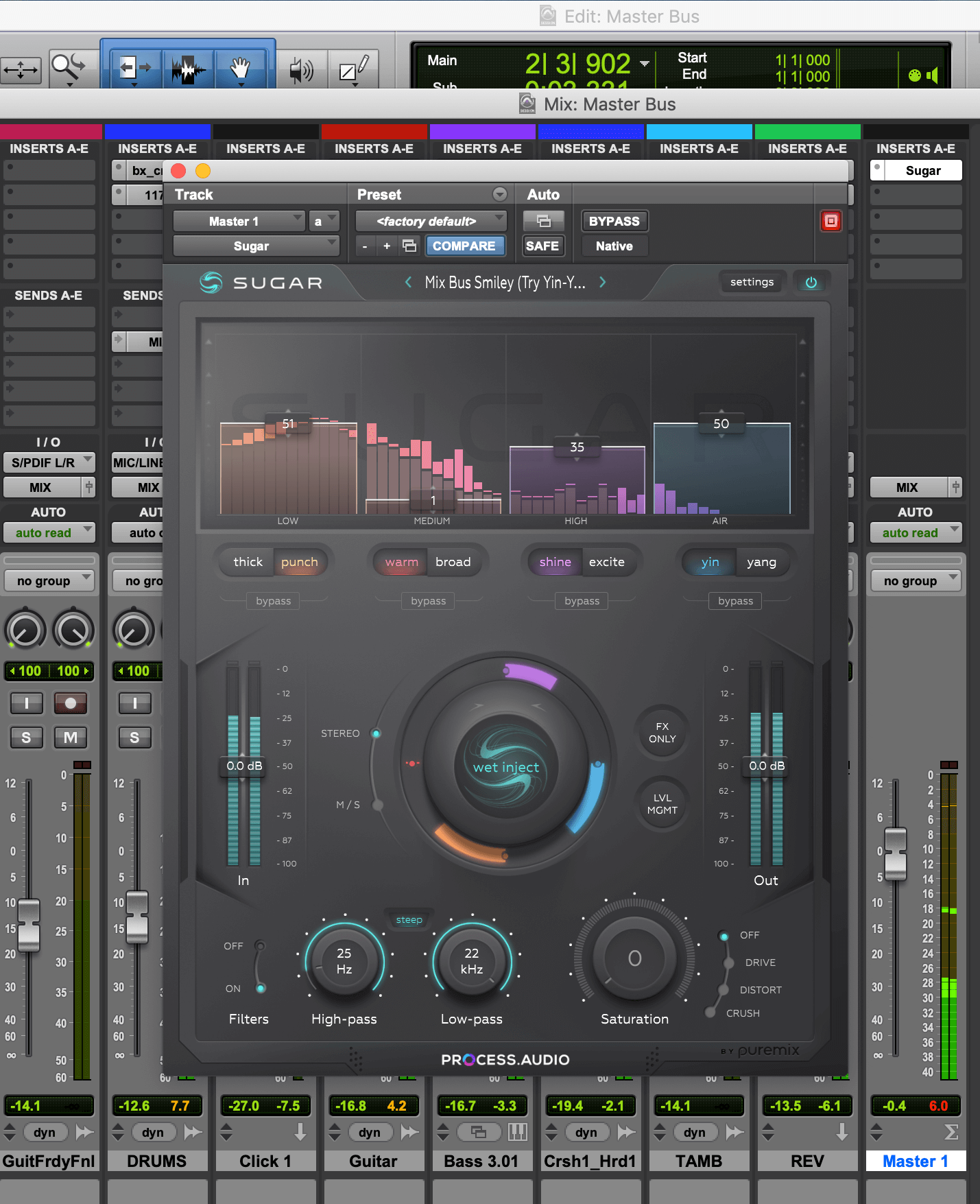 A little Saturation from Sugar works wonders on the master bus.

If you previously only thought of Sugar saturation pluginas a sonic enhancer, we hope this article shows you that it's also one of the best saturation plugins around. Its saturation section is incredibly easy to use, extremely versatile and sounds fantastic.