Use Sugar as a Parallel Compression Plugin!

Sugar as a Parallel Compression Plugin!

One of Sugar’s most valuable characteristics is its incredible versatility. Not only can you use it to enhance tracks and busses (including the master bus) you can also use it for parallel compression plugin.

Read on, and we’ll explain.

You may have noticed that Sugar doesn’t have a wet/dry knob. That’s because it does its processing in parallel. It adds its effects to the signal, rather than blending them with it. Each of the four Band Faders contains a custom processing chain that’s optimized for that frequency range. All four of the bands include compressors in their effects chains.

When you bring up a Band Fader, you’re not only enhancing the frequency components of the sound, you’re also boosting the level and adding parallel compression. Turning the Jog Wheel (Wet Inject) increases the Band Faders equally relative to their position, increasing the amount of processing, including the parallel compression.

When you turn on the Saturation section, it produces parallel saturation, which also adds compression to the signal.

One of the sources on which parallel compression is particularly useful is drums. As a result, you can dial in enormously punchy drums with Sugar, even as you’re also enhancing their tone. What’s more, you can apply it to individual drums or on a drum bus or stereo drum track or loop.

In the following example, you’ll hear Sugar on a stereo drum bus. The first four measures have no processing. When it repeats, you’ll hear the effect of Sugar. Listen to how the snare and kick sustain more with the compression. 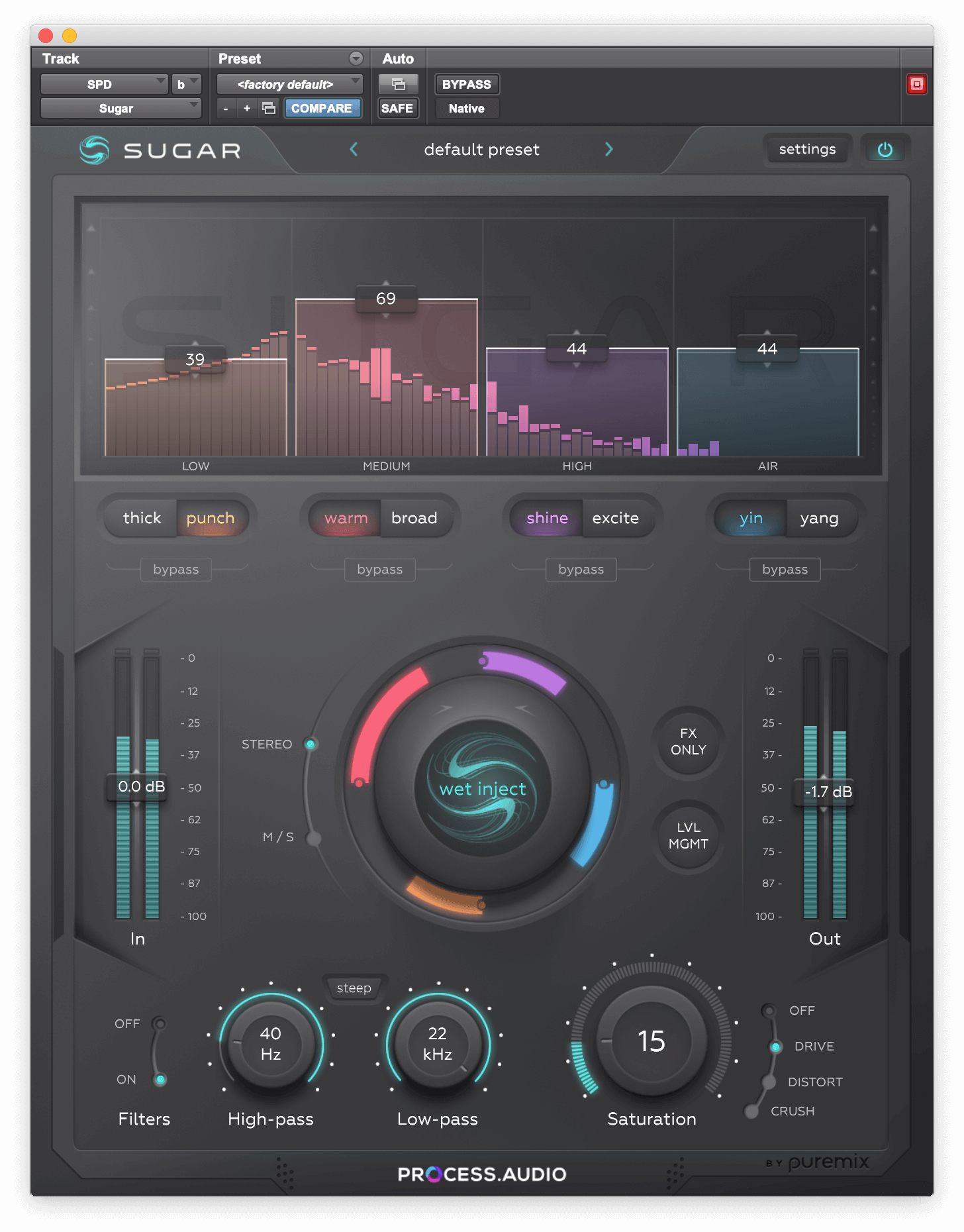 On the stereo drum example, Sugar adds parallel compression with these settings.

Sugar is also handy on individual drum tracks in a multitrack mix. Addressing the tracks individually allows you to tailor the settings more precisely to the needs of each drum. For example, you may want to put more of the Low Band on the kick than you would on the snare.

In this next example, you’ll hear four measures of a multitrack drum track without Sugar. The second four measures feature separate instances of Sugar on the kick and snare. Sugar was also added to the left and right overheads on the last four measures, making the drum mix quite a bit more punchy and present. 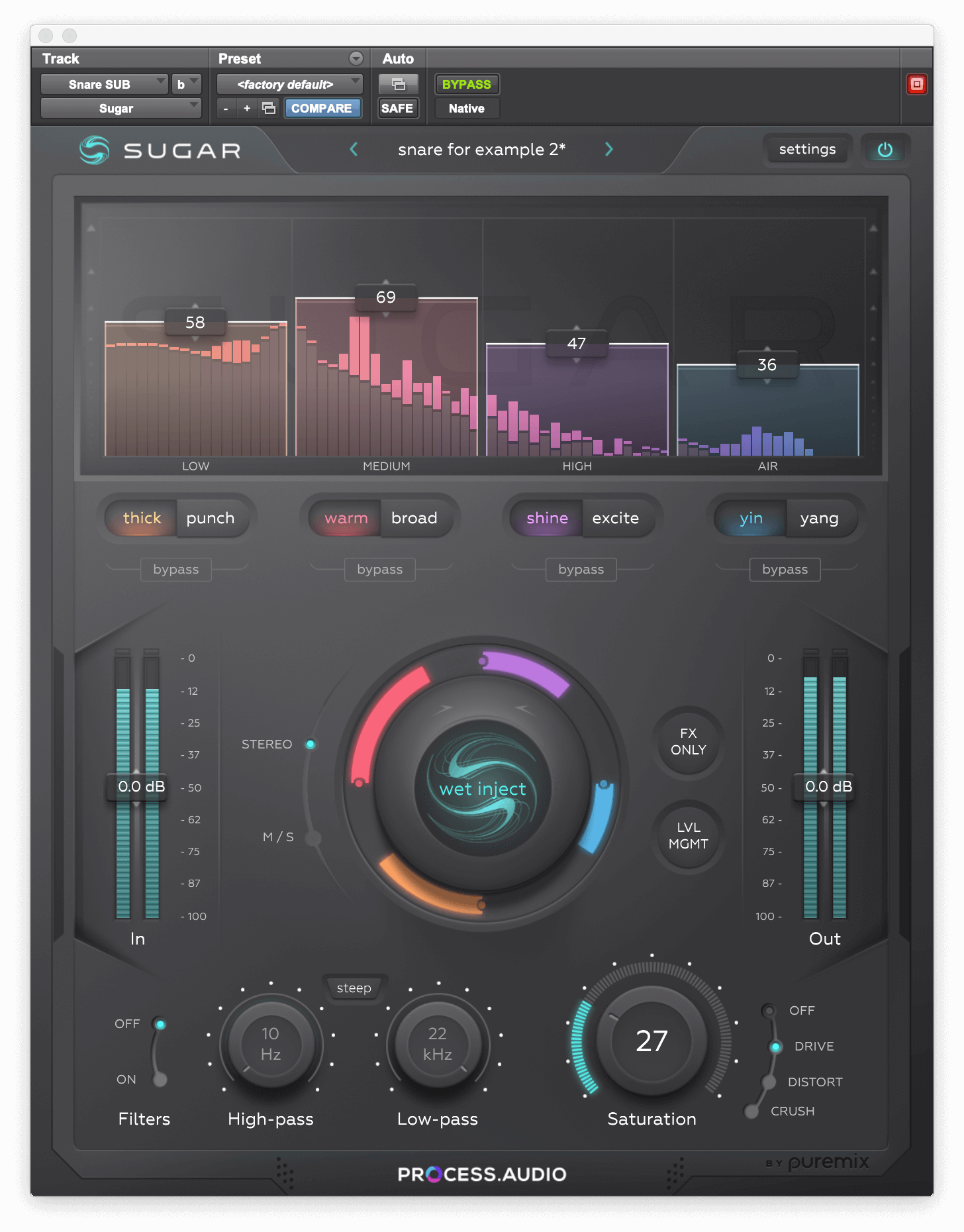 How Sugar was set for the snare track in the multitrack drum example .

While the kick, snare and overhead settings in that example are different from each other, the left and right overheads are both set the same. Since they’re providing a lot of the kit’s stereo image (the kick and snare are panned to the center), you almost always want the overheads to have identical settings to keep the image balanced.

Lead vocals are the focus of most songs, and Sugar’s multiband enhancement can help a vocal cut through the mix. The parallel compression that comes from Sugar also helps smooth them out dynamically.

In the next example, you’ll hear a solo vocal line. The first time through there’s no Sugar on it, and the second time, there is. 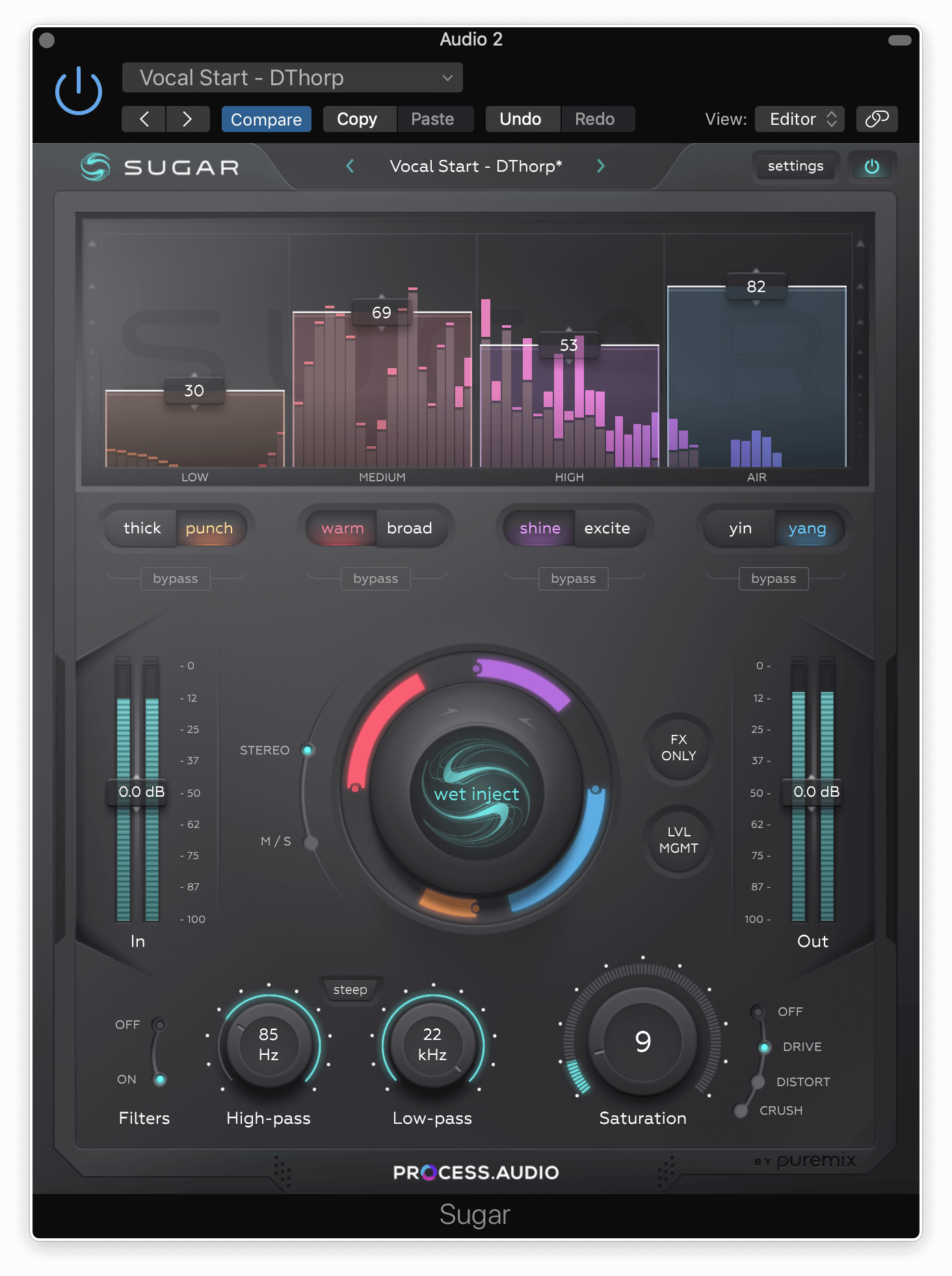 This setting brightens and compresses the vocal.

The first four measures are without Sugar, and the second four with it. In addition to making it sound beefier at the bottom and shinier at the top, Sugar’s parallel compression adds some sustain to the signal, giving it a more exciting sound.

The setting for the synth example. 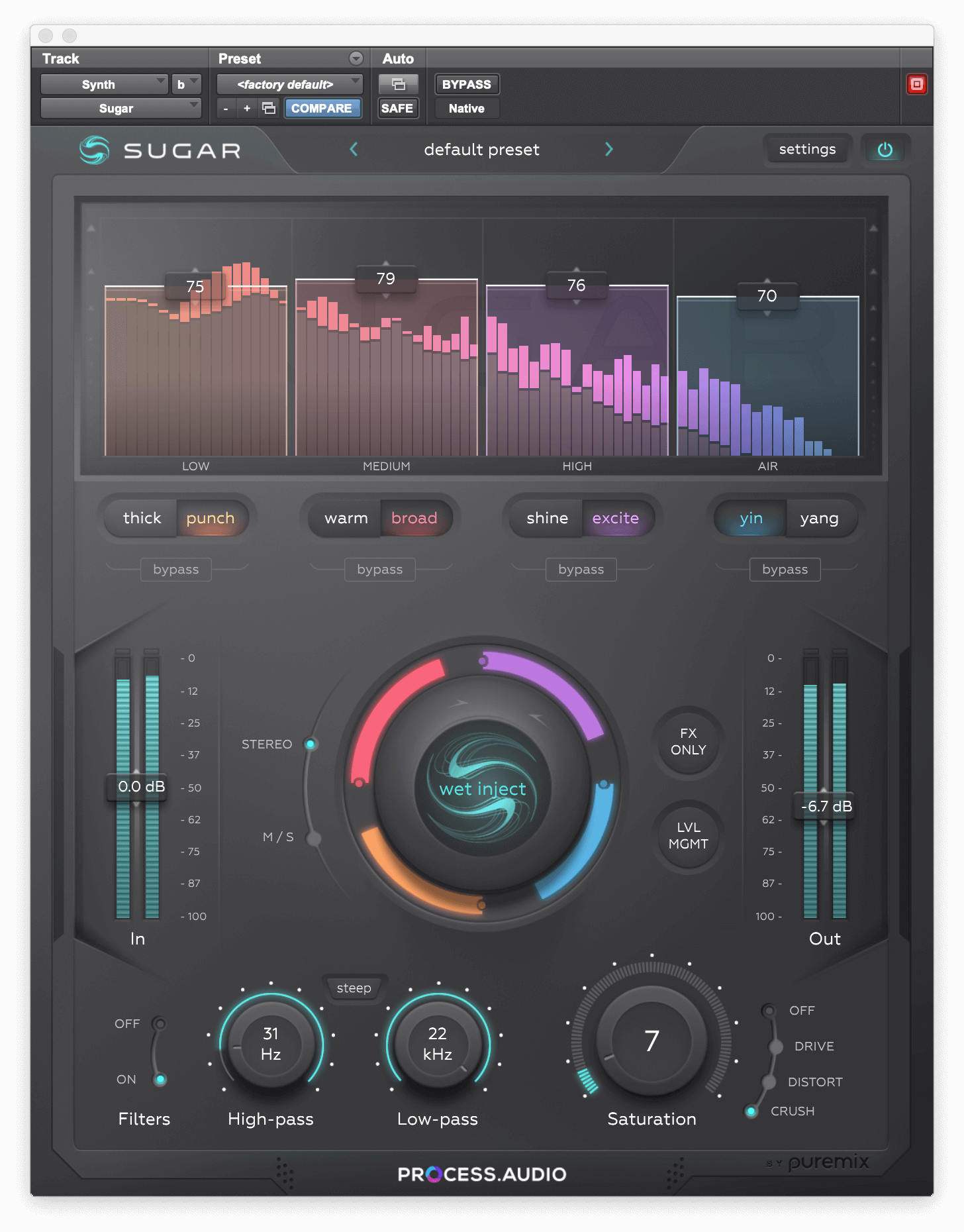 Compression works very well on most electric guitar sounds, which makes Sugar even more valuable as a guitar processor. Parallel compression gives electric guitars extra sustain and gain. When you also add in Sugar’s Saturation, you can really fatten up the sound, particularly on rhythm guitar.

In this example, you hear a crunchy rhythm guitar without Sugar. After four measures, Sugar kicks in adding compression. For the last four measures, the Saturation (in Distort mode) is also turned on.

The last section of the guitar example features this setting, which includes a fair amount of Saturation 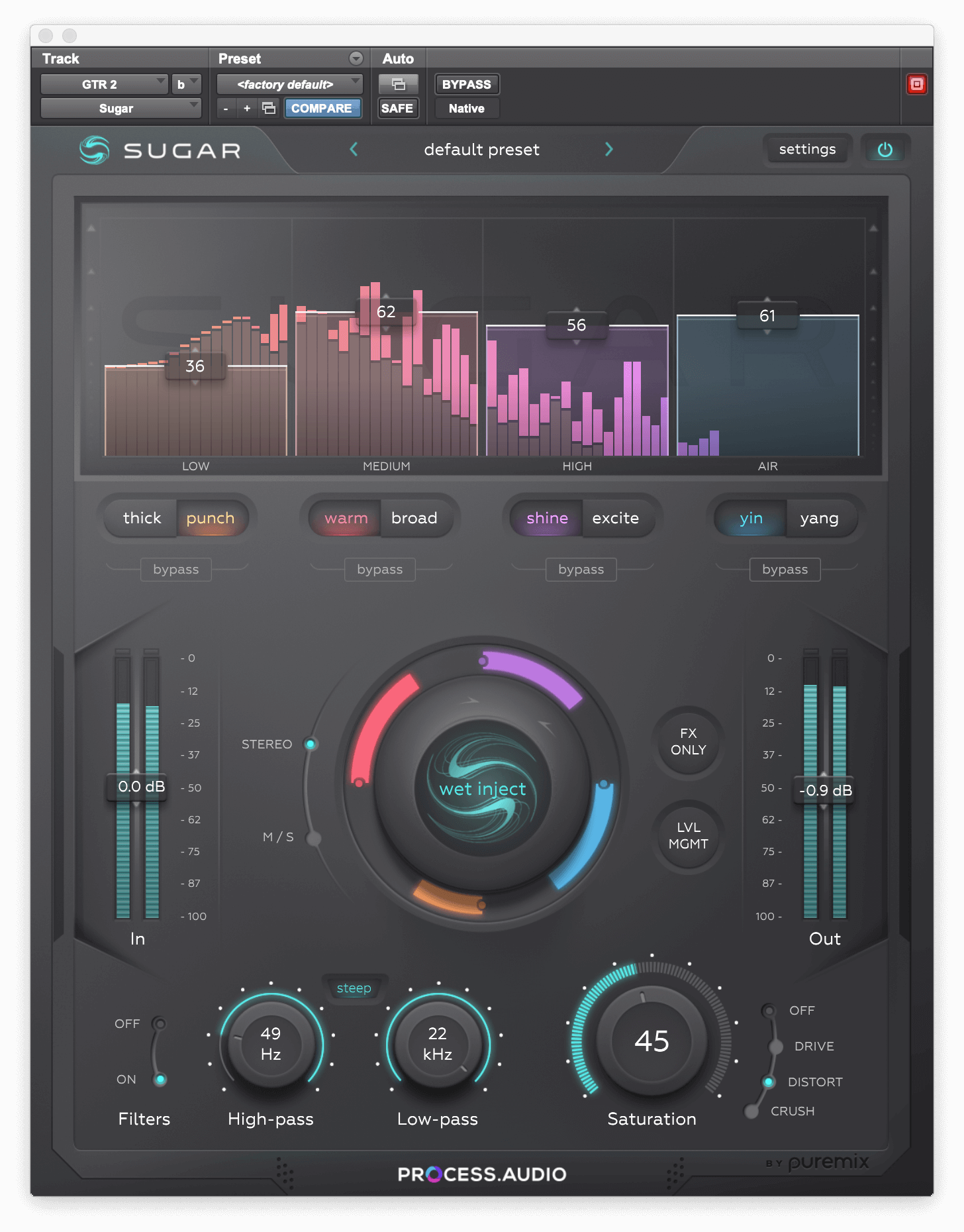 The Squeeze is On

We’ve shown you some of how you can use Sugar’s parallel compression capabilities. You should feel free to try Sugar on any source. Its intuitive interface will help you create powerful settings whether you’re going for punchy drums or an in-your-face bass, or just enhancing the overall sound of the track.